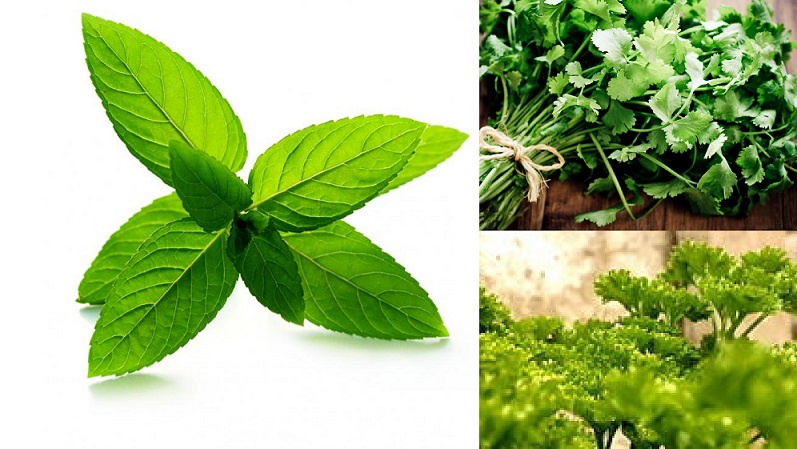 B-Complex Vitamins in parsley are vital for bone health, because they reduce levels of homocysteine, which can weaken bones and undermine cognitive function.

In addition, Parsley may help inhibit cancerous tumors due to its myristicin, which counteracts free radicals and may offset the carcinogenic effects of tobacco smoke.

Parsley also contains luteolin, an antioxidant that enhances memory and is a powerful anti-inflammatory that inhibits cytokine expression in nerve cells of the spine and brain.

Parsley has potassium, which is necessary to balance dietary sodium and regulate water. Along with its high B vitamin content, this make it an excellent kidney cleanser.

Cilantro contains Vitamin C and also Vitamin A, which works to guard your bones against oxidative damage and also boosts your primary detoxification organs, the liver and kidneys. Toxin accumulation is hazardous to bone density and integrity.

Zinc, a trace mineral that helps in bone tissue formation, is vital for normal cell division and activation, regulating growth in children, and stimulating bone building in adults.

Calcium and magnesium are crucial minerals that work together to build bone. Magnesium deficiency is rampant in Western societies, and 60 percent of all magnesium in your body is found in your bones. Cilantro also contains potassium.

Like nearly all plant foods, cilantro has powerful antioxidants and some herbalists recommend cilantro tea for calming digestive problems.

Cilantro’s cleansing effect on the body is effective with heavy metal chelation, which means it binds to heavy metals’ (like mercury and cadmium) toxic ions to help excretion from the body.

Copper, a trace mineral your bones need to manufacture collagen, is part of a crucial trio with zinc and manganese, is found in peppermint, along with Manganese, which create a critical, bone-protecting antioxidant called Superoxide Dismutase.

Vitamin C and Calcium (discussed above) are also prevalent.

Like other green, leafy foods, peppermint is rich in antioxidants, is a well-known digestive aid, and relieves nausea and many symptoms of irritable bowel syndrome. Peppermint relaxes smooth muscle tissue, so it is effective with sore throats.

Peppermint is a toxin cleanser, due to its effect on the liver. Peppermint increases the flow of bile in the liver, helping to break down fats, including cholesterol; this helps boost a sluggish liver by removing a significant burden.

It’s easy to incorporate lots of Parsley, Cilantro, and Peppermint into your lifestyle. They are found in most grocery stores and markets and can be easily added to foods or made into teas.