The Power of Probiotics

Here at Diabetes Relief, we want to share with our patients the best products and supplements we can find to help the treatment and speed up the healing process. One of those products is Probiotics. The word “probiotic” means “for life.” Can you guess what “antibiotic” means? That’s why, when you are prescribed antibiotics, for whatever reason, you must offset them with probiotics. Do you know how powerful probiotics are? We’d like to share these facts from randomized, double-blind, placebo-controlled trials (most of which studied Lactobacillus in particular):

A report published 2/8/18 concerned 60 diabetics aged 45-85 with coronary heart disease and concluded after 12 weeks of supplementation with vitamin D and probiotics that there was significant improvement in several areas, including glycemic control and HDL-cholesterol levels. A 2016 report concerning 136 T2DM patients aged 30-70 years, fasting insulin decreased by 2.9 in the probiotics group and increased by 1.8 in the placebo group, and glycated hemoglobin decreased .14% in the probiotics group and increased .02% in the placebo group. The report concluded that probiotics improved HbA1c and fasting insulin in people with type 2 diabetes. Another report from 2015 from a double-blind, randomized, placebo-controlled trial of 50 volunteers concluded that the probiotic group had lower HbA1c and improved glycemic control. A 2015 human study of 650 patients showed that adding probiotics to the standard triple therapy for H pylori eradication significantly contributed to treatment efficacy and distinctly decreased the adverse effects of therapy and symptoms of the underlying disease.

Another double-blind study published on 8/31/18 reported that probiotic therapies improved insulin resistance in T2DM patients. A 2010 study reported that a whey product fermented with Lactobacillus had a therapeutic value in treating metabolic syndrome, thus reducing the risk of cardiovascular diseases. A 2015 meta-analysis concluded that a combination of probiotics and priobiotics prior to liver transplantation reduced the rate of infection after surgery. In 2017 a report from China concluded from a meta-analysis of 15 trials with 976 subjects, that consuming probiotic Lactobacillus could reduce total cholesterol, triglyceride, and LDL significantly (high LDL creates a high risk of coronary artery disease). Another 2017 report showed lowering of pro-inflammation in rheumatoid arthritis, and another 2015 human study concluded that probiotics decreased serum total cholesterol over a six-week period.

And guess what else we found in our research? Consumption of coffee increases metabolic activity, according to an article published 3/31/09. Hooray for all of us Starbucks-lovers, huh? 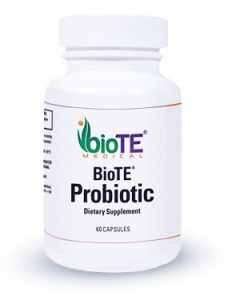 Unfortunately, probiotics are not cheap–especially the good ones. We have determined that the probiotic supplement produced by BioTE provides the greatest value. The recommended dosage is 2 capsules once a day with a meal. Each bottle contains 30 capsules, so it’s a half-month’s supply, but so worth it at $23. We hope that you will add this vital supplement to your daily routine and improve many areas of your health.